5 Pointers on Sleep & Sleeplessness While Traveling

I just woke up from what was likely about 12 hours of sleep. That was after a 2 hour nap earlier in the day. 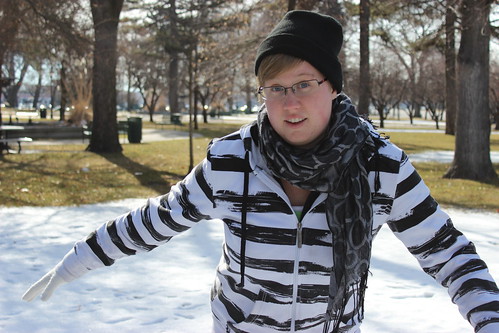 While you might not recognize a zombie when you see one, you had better be recognizing that jacket by now. Yes, I've been washing it.

Why? Oh, probably just because I’d gotten maybe 1 hour of sleep strung together the night before.

All said and done that’s about 7 hours per night (give or take on estimates).

I did okay if we’re going by averages, although I’m not sure “averages” is how our bodies are programmed to work.

I am so grateful we got the chance to actually rest last night, or I’d be like the walking dead today. Even now, my body is trying to adjust to being active – and Rachel is still in bed. And by “active” I mean lounging on a comfy chair while blogging.

Did you know that sleeping on the floor in a real room feels like heaven after spending a restless night in a cold Wyoming parking lot?

Tips for Sleeping on the Road

I wanted to write this post as kind of a “How To Sleep on the Go”, or at least include some of my observations and resolutions to try for the future. We’ve only been gone a couple of weeks now, but we’ve had our fair share of sleeping in new places.

As much as I am not one to get home sick quickly, it feels comforting to have personal items nearby. Even if you’re not using any of your usual sleeping items (pillows, blankets, etc) it has helped me tremendously to know that the belongings I need most are within arms reach.

So far, nothing has kept me awake more than feeling thirsty. Like, insanely thirsty. But when you’re at a strangers house and you’ve forgotten the water bottle in the cold car outside, it is too much to go and get it.

Keep the water bottle close by.

I made the mistake of not getting very comfortable before attempting to actually sleep in the car night before last. Something about being paranoid and not wanting to bother Rachel while she tried to sleep.

It wasn’t until hours later, when Rachel noticed how cold and uncomfortable I was, she insisted on helping me get tucked in and warm and I finally was able to close my eyes for a short while.

Tip #4: Know your surroundings as much as possible.

When you’re sleeping in a place you’ve never been before, it’s important for peace of mind to have taken in your surroundings.

Most importantly: Know where the bathroom is. The last thing you want is to be quivering in your bed, afraid to wake people or cause a ruckus in your search for bladder relief. If you’re sleeping in your car, make sure you know where you’re going to go to the bathroom if you need to in the middle of the night.

If you’re staying with strangers and not family friends, it’s also good to make sure you know how to quickly exit the building. What’s the quickest escape from where you are to your car?

On that same note, it helps to know where your host is sleeping. If you’re not sure where they might be in the middle of the night, it’s just another haunting image that might keep you awake if you’re experiencing any anxiety.

You may be paranoid as a rule of thumb, but if a person doesn’t give you chills up your spine, seems to live a normal life and doesn’t strike you as a psychopath… then you’re probably OK to sleep on their couch or guest room.

Same goes for sleeping in your car: The act itself may feel like an unsafe move, but if you’re going to, make sure that you’ve chosen a location that makes you feel comfortable.

We chose a 24 hour Walmart for several reasons:

1) We knew we were legally allowed to, so we wouldn’t need to worry about security or law enforcement bothering us.

2) Plenty of people around at any given time: Less chance for us to be snatched or bothered without notice.

3) Security cameras and other Walmart security.

While the car itself wasn’t comfortable, we felt more safe than if we’d chosen some random residential street.

Bonus Tip: Don’t expect to follow a normal sleep pattern – take advantage of sleep when you can.

Unless you’re on a very regulated trip… you’re not going to sleep regularly. (Which is only natural, because you know those words come from the same root— you know what? Never mind on word roots. I’ll let you deduce that logic for yourself.)

Some nights you’ll end up staying up late to enjoy the company you’re with. Some mornings you’ll need to head out early for any number of reasons. Sometimes those nights and mornings coincide.

More likely than not, you’ll be constantly not quite getting enough sleep. So when you get the opportunity… SLEEP. Sleep as long as you can, as peacefully as you can.

I know not everyone has travelled, but what have you heard, read or tried that is helpful for trying to sleep on the road?

P.S. We just got to Denver, CO and are visiting the brother of a dear family friend! We are so excited and happy to be here :) Looking forward to a good couple of days getting to know them.

4 Responses to 5 Pointers on Sleep & Sleeplessness While Traveling