Ah… the first sign we saw was a Welcome to Texas billboard, sporting a quip about driving nicely.

If our experience has showed us anything, it is not really that driving friendly is the Texas way. Not letting others merge, failing to use blinker lights, crossing over grassy separators to create your own freeway exit while in traffic… now that all sounds about right to me.

And as a little Ford Focus driver, there’s not much I can do to compete with the sheer monstrous size of all of the trucks and hummers. All of them. They are all in Texas. I would not be surprised if you have experienced a rapture of trucks and hummers in your state, because they’re all here now.

But all of that is neither here nor there, I just needed a good tie in to my clever title.

Dallas: The things I forgot from history class.

I hate to admit it publicly in a forum like this, but, I find that I’ve forgotten an awful lot of what I learned while I was in grade school. One of those things was that the J.F.K. assassination took place in Dallas.

My theory is that when you’re a kid, you hear the name of a place or location and unless it holds some direct physical meaning to you (you live there, you’ve been there, someone you know lives there)… you’re really not going to be able to store that little piece of knowledge away with the exception that it’s an ongoing discussion for months and years of your life.

When I thought of the J.F.K. assassination, I felt pretty clever remembering the controversial conspiracy theories, the grassy knoll, two shots, and who was definitely involved. Yet, it happened in Dallas and I had no recollection of that until our CouchSurfing host said “Did you want to see the Sixth Floor Museum while you’re here?” The what?

Of course we figured it out pretty quickly, but yeah. I had no memory of any of that.

So… we went to the Sixth Floor Museum. Note that I said we went to it, not in it, because that cost money. We walked down the street where it happened. We saw the window the shot came from. We saw the two X’s that mark where the shots fell. Being there made me want to dwell in that part of history a little more. 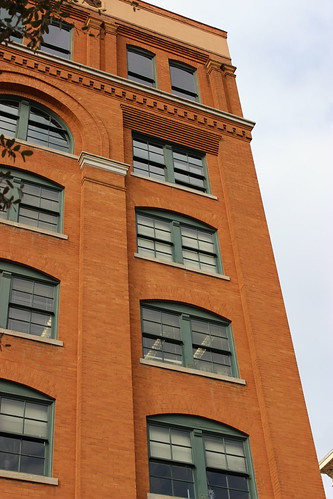 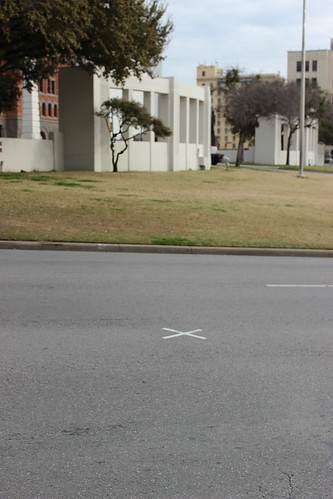 We also went out to the Hall of State, which was very impressive and made me feel proud of Texas… even though I’m not from here or even know much about their history. Although, it’s kind of hard not to know their history now, because it’s everywhere. 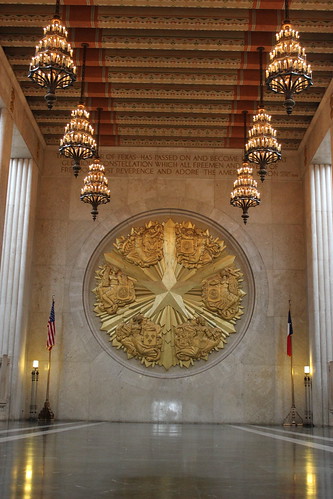 This photo of the Great Hall in the Hall of State does it absolutely no justice… and it’s a pretty impressive looking picture if you ask me.

Also – if I understand correctly, each of the seals around that huge golden star represents each of the 6 official governments that Texas has been under. 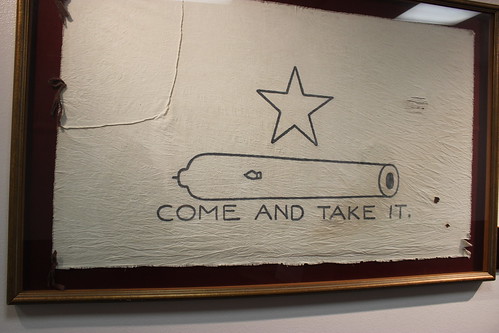 There was a hall of flags replicated to look like all the variations flags that ever flew for Texas as Texas. This “Come And Take It” was one of our favorites.

Scientific Fact*: It is physically impossible to go through Texas without being reminded that you are in Texas every 38.4 seconds.

*Totally made up fact.

I’d always heard that the Texas stereotype was to be very, very proud of being Texan (by the way, it used to be called Texian)… but I wasn’t going to make up my mind on that until we got here.

Folks, I’m here to tell you it’s all true. Texas is having a very passionate love affair with itself. 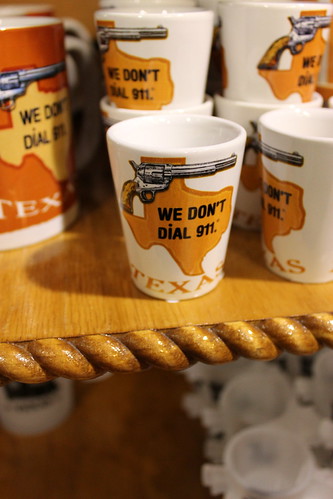 Maybe even a little aggressive? (If you can’t see the photo, then… just… never mind.)

The Aussies have invaded!

About an hour after we met our CouchSurfing host, our host Katie took us out to a Dallas CouchSurfing meetup. So much fun!

We met a 26 year old guy from Germany who had travelled to the states to meet his dad for the first time, ever. We also met a man who has been to 186 countries, and knows every single one by heart. And we met our new travel buddies! Taryn and Hope taught us of net ball, lolly water, fizzy drinks, and going out for tea.

Since then, we’ve met up with Taryn and Hope for dinner (or “tea” as they like to call it!) in San Antonio and we are currently staying with them in Austin. We’ll talk more about them later :)

On day two, we not only saw the State Hall and the Sixth Floor Museum, but also a cowboy shop.

With these radical chairs. 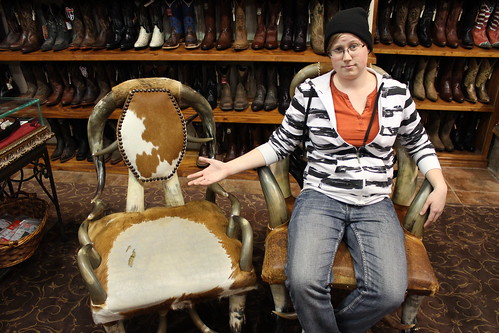 Oh yeah. Take a moment and soak that all in. 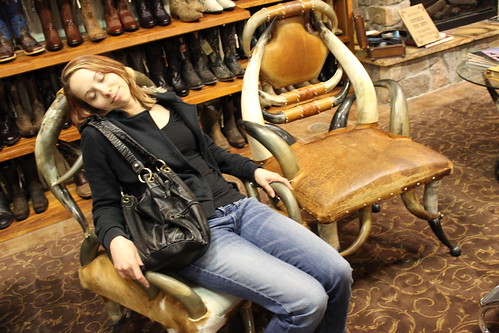 And so comfy, too!

So about that free yogurt though.

Hard to switch between those radical chairs to yogurt? Fine. Take another moment. Scroll back up, take a last gaze, and prepare to move on.

Our last night with Katie was awesome. I mean, it’s not like we went out and did crazy things or anything – we helped her cook up a super delicious dinner (beer & cheese fondue with apples and bread for dipping, and then a very interesting curry that rocked our worlds) and got to meet her long time friends and now neighbors: Delvin and Richard.

We debated going out on the town, living it up, but instead we all opted for frozen yogurt.

The best part about it? I won free yogurt, all without even trying. I’m that good.

It’s blurry, but it was taken pretty hastily. As you can see from the motion blur on my face, I was pretty eager to get to eating my yogurt. 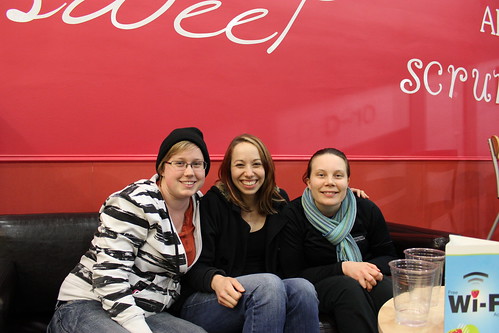 A short stay, but one we won’t forget.

It turns out Katie is moving soon, so we may actually be able to meet up with her later on the East Coast!

We had an awesome time in Dallas, and that is huge part owed to Katie and her friends. Next up was San Antonio, were I got to meet people who previously had only known me as a baby! But that is a new experience which deserves a whole post of its own.