Before I plunge into this Alabama tale, I’d like to point out just how difficult it’s been for us to exercise on this trip. Not that other states don’t have enough open space to work out it…but unless we awkwardly abandon our hosts in the morning for a run, exercise in their living room, or stop on the side of the road during a drive, exercise is rather inconvenient.

The main problem, I guess, is that I’m not especially eager to exercise in the first place. So if you make the whole process of exercising difficult to arrange, let’s just say I’m not gonna go out of my way to make things happen.

Anyway, I bring all this up because Anne & I actually exercised a few days ago! Impressive, I know. And you know that whole two-days after thing where you just want to tear off your limbs because your muscles are in so much pain? Well, that happened to us yesterday. And based on the incredibly long time it took us to walk up a hill, I think our desire for health and fitness has at last been renewed. Here’s to a new week of movement!

The drive into Alabama, much like most of our driving in the South, was beautiful and generally free of people. We headed to Madison, a city near the top of the state, to meet Anne’s family friends the Schultz’s for dinner and real beds.

“We need to buy gas soon,” we said to one another. “This place up here looks cheap!”

It was cheap for sure, but it also wasn’t automatic, only offered one type of gas and certainly didn’t have “pay at the pump” options.

“So I guess we just go inside?” I said, and inside I walked.

“Hello! Welcome wearied traveler! Yes, you can pay right here!” she told me.

Okay so maybe she didn’t say it exactly like that, but this lady was friendly.

“Okay great, do you guys take cards? Or is there a charge or something if I use one?”

“Yes,” and then she proceeded to tell me what I thought was something about them being a gas station in the middle of no where so of course they have to charge a fee because of expenses and whatever.

Ice? Maybe I heard her wrong, I thought. Maybe it’s a Southern thing…Buy a gallon of gas and get a bag of ice FREE! No, that’s ridiculous. Maybe she’s getting a receipt? No…that’s definitely ice. And sure enough…

“Here’s your ice!” she said as she plopped down a large bag of ice on the counter and slid it to me.

I should just take it. I don’t want to be rude, I mean, she’s SO NICE. No, where would we even put the ice??

“You didn’t??” she laughed, confused. “I thought you said you wanted ice!”

I laughed with her. “Oh! No, I just wanted to buy some gas!”

I had already paid so we agreed to just apply $27.13 toward gas.

I confirmed I heard her and wandered back outside to tell Anne my story while we attempted to figure out the gas pump.

“We have to stop it manually,” I told Anne.

“What? Really? Hmm…” we pondered the gas pump together.

After an embarrassingly long amount of time the nice lady at the counter came out to help us.

“Hahaha, you city folk!” she told us and showed us how to pull up the lever and start pumping the gas.

We probably still looked really confused because then an older man who worked there came out to help us.

“You girls need help?” he said in a gruff voice.

And after another minute of embarrassment as he stood there pumping our gas for us, we were back on the road and laughing at our first true taste of the South.

Shuffleboard with the Schultz’s

Shortly after we arrived in Madison, we were fed an awesome dinner of corn bread, cucumber salad and a shredded beef type of stew. Mmm. Lydia and Bob then gave us the official tour, ending with the awesome game room they have upstairs.

Here we discovered shuffleboard. Well, it’s where Anne discovered it and I actually learned how to play.

Shuffleboard is fantastic and took up much of our time at the Schultz’s home. Anne meticulously re-vamped the wax table and we had some pretty close games. If you haven’t ever played shuffleboard, get on that (because it’s pretty fun).

The next day we decided on visiting the Unclaimed Baggage center Lydia had told us about. It’s a store comprised of everything people leave at airports, purchased sight-unseen by this store and sold to whoever wants it. 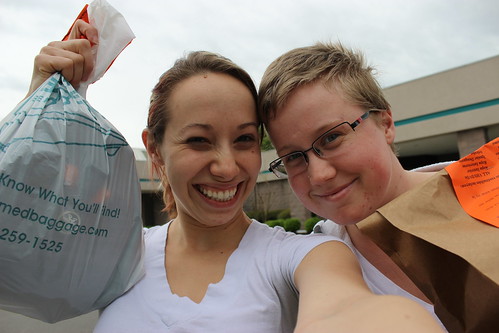 There was some pretty awesome stuff there including diamond rings, a TON of clothes, and iPads! My question for you is, who decides it’s too much work to get their DIAMOND RING back? Were they just like, “Oh, whatever. I’ll just spend another $10,000 and get a new one. No biggie.” My conclusion is that they must have died in the wearisome process of baggage claim.

Anyway, we bought some pretty neat stuff there like my new camera bag. I was in dire need of an upgrade from the plastic Target bag I was using. 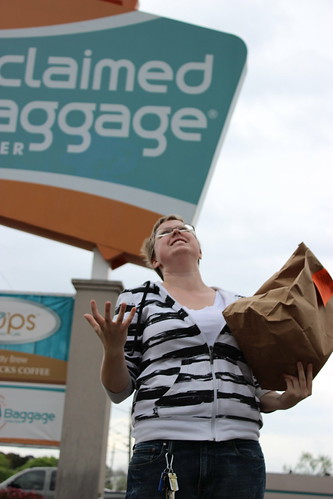 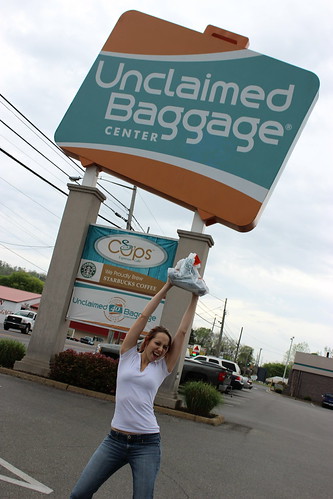 After we were all shopped-out we headed back to the Schultz’s house and Lydia treated us to a wine tasting where a few of her awesome friends hang out on Thursday’s. Shout out to all of our Madison friends!

Anne and I are pretty sophisticated wine drinkers now – especially after our Vineyard stop on our way out of Alabama where we had another wine tasting and bought the most delicious Peach wine. We even tried chocolate wine with Lydia. Imagine mixing chocolate milk with wine…now you can share with the kids, too! Just kidding. ;)

But before we knew it, our time in Alabama was over and we were headed out on the long drive to Pensacola where Alex and Bryan eagerly awaited our arrival, thinking of nothing else. Well, probably.