I am heavily pondering pens and cola.

Peach wine — yeah, that sounded good. A free wine tasting is all you need to keep your day strong during a multi-hour ride from Madison, AL to Pensacola, FL.

I pulled out my phone to let Alex know when we’d be getting there. She was so worried about being able to time a meal with our arrival! Little did she realize that we’re really easy to please.

It was going to be the first time we’d seen Alex and Bryan since they got married. In fact, it would only be the third time we’d even met Bryan at all! It wasn’t too long ago that I’d have laughed at you for suggesting I’d actually be in Florida when I saw him next. 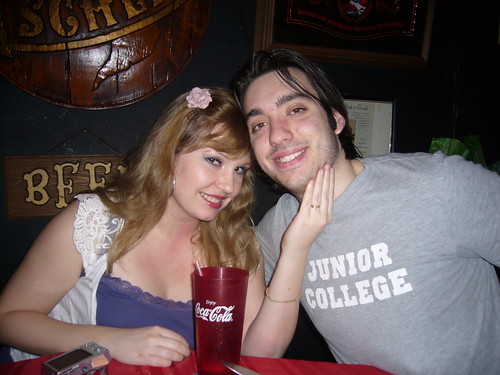 He wasn’t at the house when we arrived. In fact, Alex wasn’t there either, much to her dismay! But it was only a few moments before she pulled into the parking spot next to us, back from the grocery store with our dinner in hand.

After our delicious meal of filet mignon wrapped in bacon (Rachel tells me there was salad, but my memories are fondly filled with meat) we gathered Bryan from his place of work and headed straight to a quirky, somewhat Bohemian bar called The Elbow Room. By quirky, I mean nerdy. And by nerdy, I mean filled with Star Trek paraphernalia and references.

We played an intense game of Scrabble in which Rachel totally cheated to win. (Rachel tells me she didn’t cheat, but my memories are fondly filled with the idea that I should have won.) Bryan came a close second, with Alex and I somewhere in the distance yelling “Get back here now, I mean it!”

The Hunger Games was weighing heavily on my mind since I had read the whole first book in the last 24 hours, and when I voiced my preoccupation I learned that Alex was also very interested in seeing it. At first we thought we’d go and see it on Saturday (the next day) but the longer the night went on, the more we realized we had to go see it right then and there.

So we got to see the Hunger Games, which was awesome. And frankly, I don’t know if you noticed, but I was pretty awesome as well. (If you can’t see the picture, you won’t understand.)

…no, I am not a nerd. And yes, I read the books because of the movie. And that’s okay.

A warm welcome to Florida beaches.

We tried to start our own version of Hunger Games on the beach, but it didn't go as planned.

Florida beaches are much different than San Diego beaches. First of all, you can actually walk out into the water. We didn’t do that in Pensacola, but we could have.

Secondly, the water is pretty warm. For those of you from the West Coast, that’s just weird right?

Last of all, the water is really calm compared to San Diego beaches. I finally understood why we’re known for our surf back at home — it’s because we have surf.

We happened to be there on a day where there were actually some waves, but for most of what we saw in Florida that was a pretty rare sight.

That day included a drive-thru tour of the college Alex and Bryan attended and met at. We brought the day to a relaxing pace by picking up Hungry Howie’s pizza and watching Orange County for the first time.

We girls felt a little sluggish after that and went for a run. It turns out Alex is in much better jogging shape than either of us.

Our time in Pensacola felt short as Sunday morning rolled around. After we bade Alex and Bryan adieu,  we picked up some tasty caffeine at a local shop called the Drowsy Poet (we got the Shakespeare and Milton) and were on our way.

If you’re ever in Pensacola, make sure you hit the beach (if only to see the white sand). It’s a beautiful thing, and it was one of my favorite Florida beaches.