And that’s how we ended up sleeping with roosters.

Imagine a world where you’re surrounded by beautiful beaches on every side. You’re never more than a mile away from the nearest body of drop dead gorgeous ocean views. You can kayak, jet-ski, or simply take in the characters walking around. You can almost hear the roosters in the background…

Welcome to Key West: Land of wonder, whack-jobs and chickens.

Don’t forget the roosters either. They’ll wake you up at 4am just outside of your car and never let you sleep again… but why were we where we could even hear roosters?

Let me tell you.

Our one and only bad CouchSurfing experience happened in Key West.

It was our own fault, really, because it was our first time messaging:

Rachel and I knew going in that we needed to be extra alert and vigilant so that neither of us disappeared with a one-way ticket to a private torture island off the coast.

But we wanted to be in Key West for more than a few days, and we didn’t want to burden a single CouchSurfer with our presence the whole time — so we went ahead and took the risk by requesting this guy for our first 2 nights.

The night started out okay, but then he kept wanting to go the clothing optional bar.

You know what? I’m not a super judgmental person, and I realize some people are into things like public nudity. But it’s really not for me, and it seems like a very odd thing for a single dude to be trying to convince two girls to go do with him.

He wasn’t necessarily trying to get us naked there, but he did keep telling Rachel she should get her body painted… which involves stripping down and getting well, you know. Your whole body painted. Hashtag weird.

The first time he took us we tried to play it cool. The whole building is 3 stories, each story being a unique bar. On the top is the exhibitionist’s mecca.

“Let’s try the second level bar,” he said. It was a normal bar, and we played a game of pool there — which may have also been my first time winning at pool, by the way.

We managed to make it in and out without much harm done. (It was not exciting, trust me.)

He then took us on a mini tour of the main street all the way up and down Key West. It’s like a mile wide island and it didn’t take more than an hour or so, what with darting in and out of neat looking spots.

Somehow we ended up back near the bar again. “Let’s go back! I have a buddy who is hanging out up there, you can meet him!”

It’s hard to tell someone that you don’t want to meet their buddies, and we were just in a really awkward position between: not wanting to piss him off if he was a psycho, and not wanting to be rude to the person who was offering us a floor to sleep on, yet also not wishing to hang out at the clothing optional bar anymore.

If you’re keeping track, the ratio of logical reasons to go vs. not go was 2:3 and we ended up getting dragged up there again. Awkward does not even begin to describe the situation. I developed a severe bladder issue so that I could drag Rachel to the second floor (where the bathroom was) to discuss our plans every 5 minutes.

We decided that if things didn’t escalate and he just turned out to be a dude with odd tastes we’d let it slide… maybe. If it escalated at all, we were going to get out of there.

After what felt like hours of being subjected to such awkwardness, there were finally two things which finally gave us our answer.

As he reached for his shirt to take it off, Rachel and I met wide-eye to wide-eye and knew this is where we drew the line.

I had another moment of bladder difficulty and we whisked down to the second floor one more time to plan our escape route. It turns out I was feeling very sick and we were just going to get a hotel.

Of course, the term “hotel” here really means we found a side street to park on and we just slept in the car.

And that’s how we ended up spending our first two nights in Key West sleeping with roosters.

About those roosters: first of all, the gypsy chickens of Key West are everywhere.

And the roosters are noisy.

The beaches of Key West don’t allow overnight parking, but they do open up at 6am. Turns out that the beach doesn’t sound like a bad place to sleep when the other option is your car.

The other bonus of the beach? Less chickens. For some reason they don’t hang out too close to the beach.

So at 4am when the roosters woke me up from my not so peaceful car slumber, I started to develop a plan. Just as soon as 6am hit, I drove us to the beach.

“I’m going to go sleep on the beach,” I whispered to Rachel, who had somehow managed to still be mostly unconscious at this point. She drearily followed me out to the quiet shoreside.

I spread my towel on the ground, brought out my pillow, cuddled under my jacket and fell asleep with this amazing view: 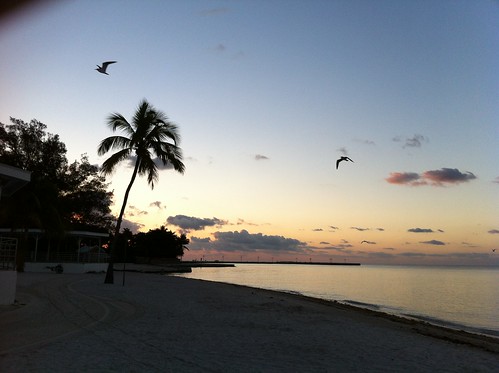 There are pros in every situation if you look for them, am I right?

CouchSurfing redeemed itself in the following few days, as it led us to meet some of our favorite people in the world, ever. 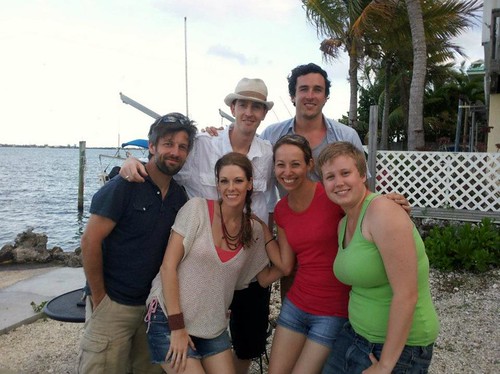 Meet: Ryan (in the hat), Lane (the only other female), Scott (far left) and Andrew (floating above us).

Ryan and Lane were our hosts, and they have an amazing background story.  You can read more about them and their own crazy adventures on their blog: Living The Dream.

Scott and Andrew were buddies surfing in a tent in the backyard, while Rachel and I slept on the couch inside. The six of us formed what would turn out to be a hilarious, quirky and awesome CouchSurfing family during the following three days. 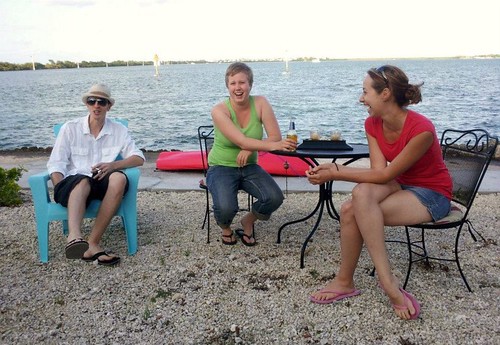 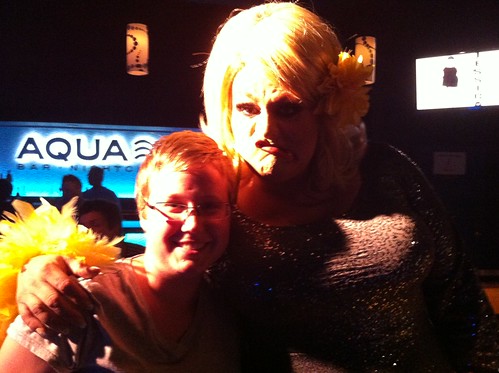 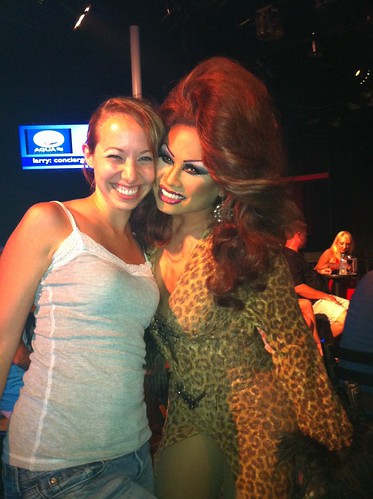 (Although sadly, Rachel was feeling sick and couldn’t go that day.) 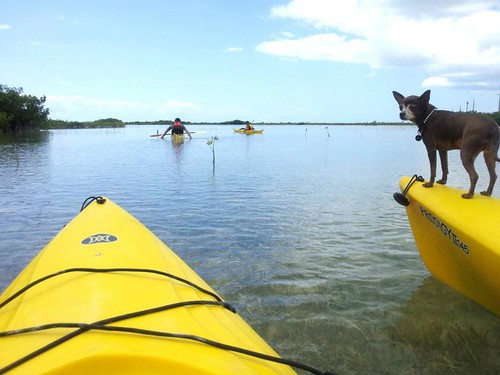 And shared generally fun times and sunsets together. 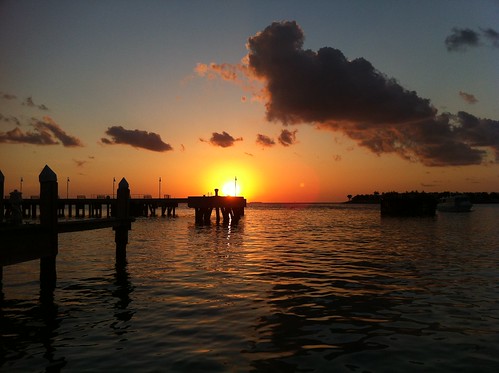 And I stole Andrew’s hat. 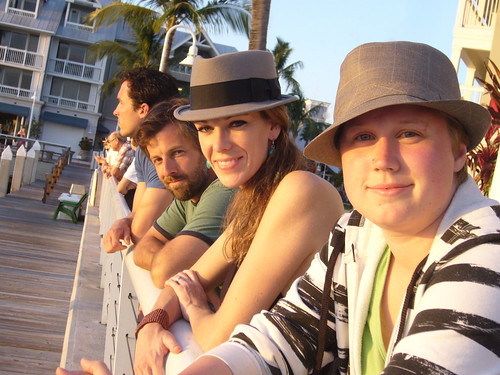 There’s simply not enough room to talk about everything that happened during our stay, so I’m going to leave you in the knowledge that we survived and came out on the other side for the better.

And our awesome CouchSurfing family is mostly to thank for that. :)

P.S. For anyone who found this article interested in good info for traveling in Key West:

– If you need a shower, the community center will let you shower for free. You just have to check in, and don’t leave a mess. We didn’t find out until it was too late, but I thought others might find it useful.

– The library has free wi-fi and bathrooms. This is very useful if you need either but don’t have anywhere to be.

One Response to And that’s how we ended up sleeping with roosters.