Miami is full of Australians, gators, and s’mores

“I’m kind of excited about Miami! I have glamorous ideas of it from watching TV shows like Dexter and Burn Notice. It’ll be interesting to see what it’s like in real life.” – me, a couple months ago

I now understand why people just kind of shook their heads and chuckled at me when I said that. More on that later.

Back to the Australians, gators and s’mores. 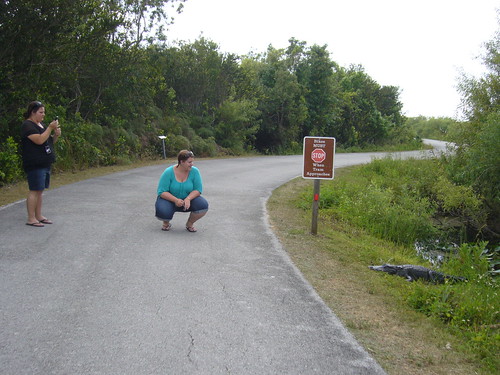 Remember our awesome friends, Taryn and Hope? (They also have a travel blog and they are doing like a thousand countries so you should check it out.)

Let’s review our history, yes? So we met Taryn and Hope in Dallas while we were surfing with Kat. Then we hung out with them at Dick’s Last Resort in San Antonio. After that we booked a room with them for 3 nights in Austin.

Yeah, we go way back. And it turned out that wasn’t the last we’d see of them: We got to meet up with them at their last stop in the USA before they flew off into the distance.

The Australians that we didn’t let get away.

We booked a free Sheraton hotel with my travel points courtesy of SPG. Since we wanted to be able spend every last moment with our super cool friends, we told them they were welcome to crash in our room! So they promptly cancelled their hostel reservations so they could hang with us.

That’s how much they loved us. *sniff

We accidentally went to Pollo Tropical, which had been recommended to us by our Dallas friend Kat — but we’d forgotten. It only took us about an hour to drive what would have taken 15 minutes if we’d not gotten dazed and confused. That was mostly due to the insane amount of toll roads in Miami that we were trying to avoid. (The food was cheap and relatively delicious.) 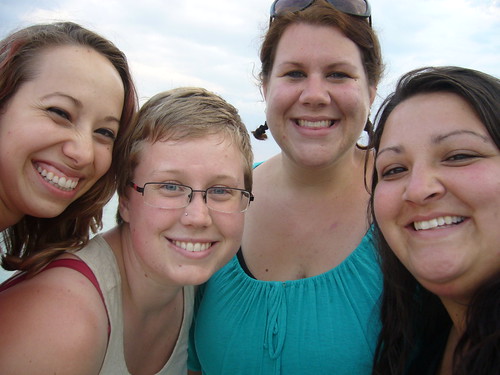 Miami beaches in 40 minutes or less.

We were staying in Miami and we all wanted to see a beach or bust! Imagining a golden sunset with flashy lights in the background, we arrived and realized we only had enough coins to park for little less than an hour.

We shrugged our shoulders and walked to the beach, where we realized that it just wasn’t a beach day (or we were at the wrong beach, or at the right one a little too late). All of the chairs were stacked up near the booths and the sun was setting out behind all of the buildings.

I’d almost forgotten we were on the east coast until then — seeing a sunset at the beach with the beach behind the buildings rather than over the ocean was a bit disconcerting. 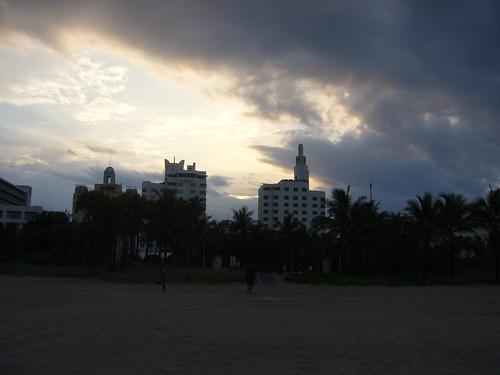 So we sat down and pulled out our makings for s’mores.

Taryn and Hope wanted to have s’mores before they left the states, because apparently that is an American thing to do.

We’d picked up the fixings for them at a grocery store before heading to the beach, even though we knew there was a very slight chance that we’d have any magical way to cook them.

(Side note: Wow. You know I’ve been in too many southern states when I start using the word “fixings” in my blog posts.)

We ate the s’mores raw at the beach, but there was plenty leftover when we got back to the hotel.

Then somebody brilliant said: “We could use the iron to cook them.” 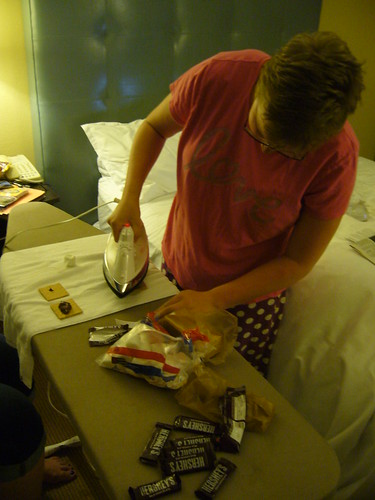 Bam. Instant success. It took us a few tries to get the perfect technique for the proper ratio of marshmallow gooeyness to chocolate melty goodness, but every try was still delicious.

Gators are right behind you! 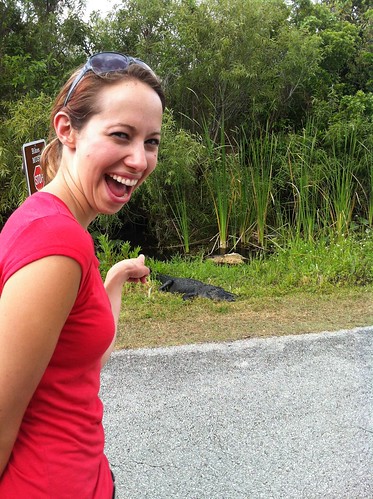 There’s one other thing you have to see when you to Florida: alligators.

Where better to go than the Everglades? 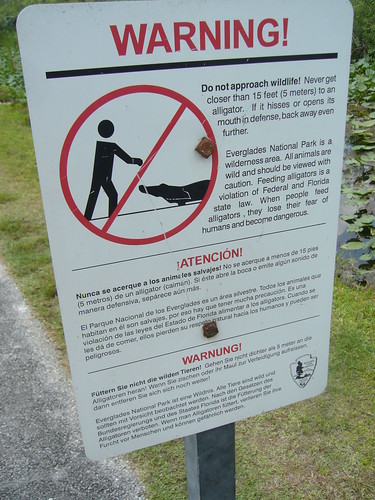 Pictured: The warning you get before walking into Shark Valley.

I’d like to fix this sign to say: “If it hisses or opens its mouth…” HOLY CRAP RUN FOR YOUR LIFE. 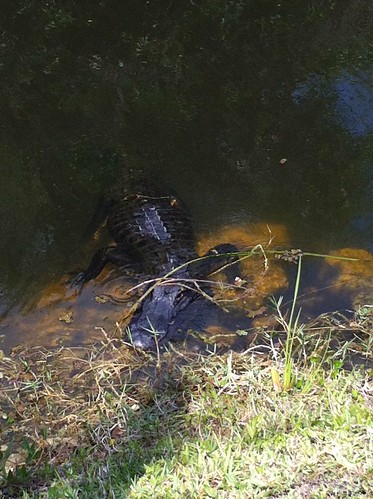 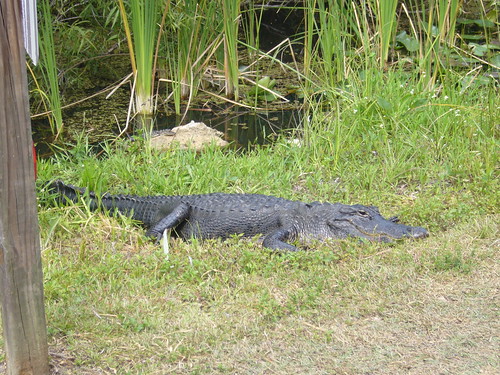 It turned out to be mating season for alligators. One of our first sights was an alligator making a very strange guttural noise that sounded a lot like the gator in this video on YouTube (click that link if you want to hear it).

As we walked through Shark Valley we saw countless alligators swimming around, with no fence or anything to keep them from shredding us to pieces and making us lunch.

That’s where we lost Hope, forever. 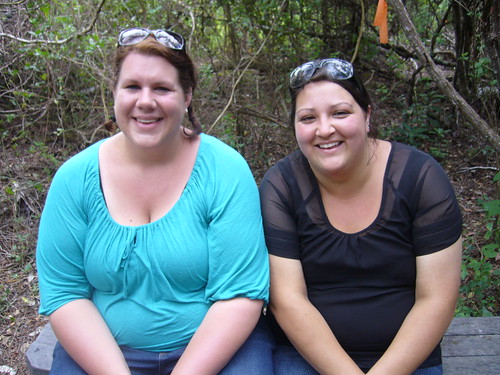 JUST KIDDING! We all lived to see another s’more. 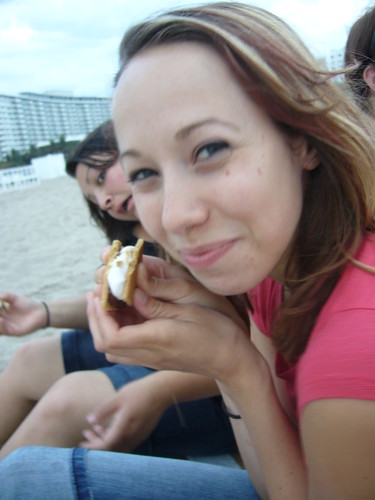 So anyways, Miami isn’t what I thought it would be.

Perhaps if we’d had a guide who knew and loved Miami to show us the hot spots and tell us where to go when, we’d have liked it a bit more. In my personal opinion, it was a bit pricey and overrated. I’ll have to go back with someone who knows it next time.

Overall, we absolutely loved getting to see Taryn and Hope one more time! Even if their train was 3 hours late when we went to go pick them up ;)

One Response to Miami is full of Australians, gators, and s’mores